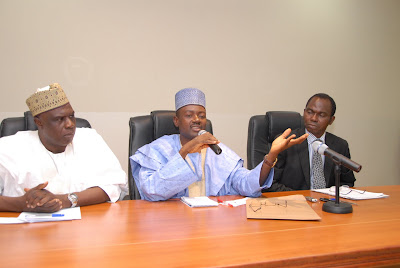 Minister of State for Information and Communications, Mr. Labaran Maku, with the Acting EVC of NCC, Engr Stephen Bello (left)  andPermanent Secretary, MOIC, Professor Nicholas Damachi(right)  during the telecom stakeholders meeting with the Minister at the NCC Conference Room in Abuja.

The acting Executive Vice Chairman of the Nigerian Communications Commission, Stephen Bello, has announced that the Commission is set to reintroduce a price cap regime in the telecom sector, while maintaining the registration date of SIM cards slated for May 1, 2010, with a process for the new SIM cards.


Speaking with journalists in Abuja, the acting EVC said price cap regime which existed at the inception of mobile phone services is one of the issues that the Commission will tackle soon  to ensure that operators operate within a bar relative to interconnect rates.

According to him, “In 2001 when GSM started, we said that nobody should charge above fifty naira per minute and that was many years ago. Now we have the fact that the number of lines has increased, there is economy of scale and you know that as you have advantages of economy of scale the unit price comes down. We believe that the competition in the industry will control prices, nevertheless the situation may arise in which people sometimes cooperate and try to maximize their profit. “

He added that “Therefore, we in NCC have developed a policy we refer to as price cap regulation where we give a price and the competition can make you to operate within this degree of freedom, but not beyond it. There are many methods of regulating prices in the industry but the current  Government policy is that the Commission will not be engaged in direct price control as existed the seventies when government will publish the price commodities wich no seller with go above.

Elaborating on the interconnect rate, Bello said, “We have Recently reviewed the interconnect rates, which is the rate at which operators pay when they transfer calls amongst themselves, but these are yet to trickle down to the subscriber and we have resolved that we will need to revisit the price cap to ensure that these advantages trickle down, and we will begin the process with consultation with the operators and collection of some data to implement it”.


On the issue of commencement of registration of SIM cards to which some operators have expressed reservations with the dateline, the acting EVC said,
“Our experience in this industry has shown that operators always resist anything that will cost them extra money, even when they believe in it and they believe that it’s necessary because they are always looking at the bottom line, they want to maximize their profit. The same thing happened with per second billing. We have been on this thing and we have given enough time to get ready, all the issues have been discussed, we have had many meetings so the issue of publicity we are addressing it immediately so we are maintaining our stand that SIM card registration will start on the 1st of May unfailingly.

Bello reiterated that the Commission under him will not waiver in all the ongoing projects inherited from Engr. Ernest Ndukwe’s regime such as number portability, SIM card registration, emergency communication projects and many others.

According to him, “I have been involved so it is a matter of just continuing the process. There is nothing that is on the line that we are doing that I have not been fully involved in, so I am familiar with all the antecedents and all the issues and how to take it to a logical conclusion so definitely I will just flow along and make sure that all these things are put in place and completed”.

The minister of state for Information and Communications, Labaran Maku, at the interactive session with industry stakeholders, said, “The stakeholders spoke their minds and that the Honorable Minister has given insight into what some of his policies and operational modes will be. I think based on the interaction, the industry is set to move fast, that the gains made in the past will definitely be improved upon, and we will go ahead and we believe there will be no gap.”

at 1:29 PM
Email ThisBlogThis!Share to TwitterShare to FacebookShare to Pinterest