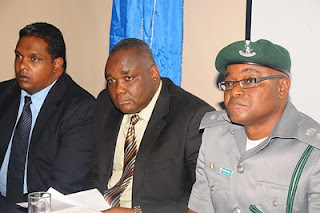 L-R.  Silvin Sinan, Head of care Nokia West Africa,;  Reuben Mouka, Head, media and public relations,  Nigerian Communications Commission; Timi Bomodi Chief Superintendent of Customs.
As part of its commitment to ensuring that the Nigerian mobile devices market is rid of substandard and counterfeit products, Nokia the leading manufacturer of mobile devices has taken the frontline in the battle against counterfeit mobile devices as it held a roundtable discussion held at the Protea Hotels Ikeja, Lagos.
Head of Care, Nokia West Africa, Silvin Sinan, said that the best way to curb the menace of counterfeit devices is to reduce the demand for such by highlighting the various dangers it poses to Nigeria and Nigerians.
According to him, “When it comes to counterfeit devices, it is a buyer’s market. As long as there is demand there will be supply, so we have to work together to highlight the dangers that these sub-standard devices pose to the health and well-being of the Nigerian; basically to get them better informed thereby eliminating demand for these devices”.
He added that among many brand names that are being counterfeited, Nokia appears to be the hardest hit due to the fact that it is a highly trusted brand name in terms of performance, durability and resilience.
Also speaking at the event, the Director General, Consumer Protection Council (CPC), Ify Umenyi said: “As the apex consumer agency of the Federal Government of Nigeria, the CPC has initiated several interventionist programmes like the establishment of Joint Task Force in conjunction with Standards Organisation of Nigeria, NESERA and the Alaba Market Association to curb the continued influx of these ‘China phones’ into the Nigerian market.”
In addition, Assistant Director, Federal Ministry of Environment, Oluwatoyin Agbenla, said that counterfeit devices are a menace to the environment and can affect the way we live our daily lives.
According to her, “E-waste from electrical and electronic devices can pose a real threat to human lives when they are not properly disposed of or recycled”. For example if these are burned or incinerated they can release toxins into air or water including carbon monoxide, hydrocarbon gases amongst other harmful gases that can have greenhouse effects such as acid-rain and these also cause Global warming which all add to the effect of climate change.”
She added that “counterfeiting is a challenge globally and the Nigerian society is no exception. The desire of people to own luxury items has moved people to go for counterfeit products but these products are not with their shortcomings which often pose a risk to the users through radiation which could cause prolonged headaches, exploding batteries and electrocution while charging”.
Group Head, Electrical/Electronics, Standard Organisation of Nigeria, Adewumi Richards, said the issue of counterfeiting is a trade issue not with the monitoring bodies but on the genuine producers and the counterfeiters.
He noted that counterfeit products don’t come into the country in large quantities but on small quantities thereby making detection impossible from the point of entrance, adding that for them to be more active they need information in other to be more proactive.
He also pointed out that public awareness must be enforced through the media thereby informing the consumers on counterfeit products.
The Head of media, Nigerian Communications Commission, Reuben Muoka, said for the commission to fight against counterfeiting they need to work with the media. According to him, we approached the issue by publishing the type approved handset on our site.
Mouka said that from a recent research carried out on the poor level of quality of service in the telecoms industry it was observed that the  use of counterfeit handsets contributed to the poor quality of services that consumers complain of, he thereby urged the producers of this products to build there manufacturing plants in the country as this would help in bringing the cost while curbing the menace.
The roundtable provided a platform for the discussion of this most important of issues facing stakeholders within the Nigerian economy and Nokia is working in partnership with various stakeholders of sectors which are affected by the issue of counterfeiting.
Stakeholders who were in partnership with Nokia on this interactive forum included; the Nigerian Communications Commission (NCC), Standards Organization of Nigeria (SON), Consumer Protection Council (CPC), Nigerian Customs and the Federal Ministry of Environment.
at 5:08 AM
Email ThisBlogThis!Share to TwitterShare to FacebookShare to Pinterest
Labels: Nokia