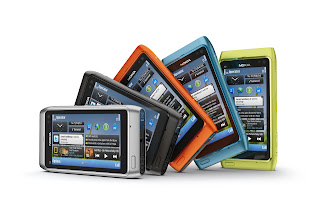 Nokia's standing as a leader in the smartphone market has been under increasing pressure in recent years, as a string of 'high end' handsets have failed to capture the minds and wallets of the phone-buying public.
So to fix that, Nokia's gone back to the drawing board to bring out the Nokia N8, featuring a new OS and a huge amount of high end tech packed under the hood.
Having announced the phone back in April, Nokia has been holding off on release to make sure the user experience is as good as possible.
The underlying software has been improved and Symbian^3 builds on the previous iterations of the OS seen on the likes of the Nokia 5800 XpressMusic and Nokia X6, but adds in multiple home screens, widgets and an improved User Interface.

Hardware-wise, Nokia has pushed the boat out too with the new N8, offering a full metal chassis with anodized scratch-proof paint to give the phone a really high end feel.
Being a scratch-proof - rubbing keys on it produced no ill-effects, although the slider switch on the side can get its paint rubbed off over time.
However, with a 12MP camera with Xenon flash bolted on the back, it's not a super-slim device - it fits in the hand well enough but the dimensions 113.5 x 59 x 12.9 mm aren't going to rival the likes of the iPhone 4 and the Samsung Galaxy S, especially when being forced into more tightly fitting trousers.

The Nokia N8 also doesn't have a removable battery either - the full metal chassis is completely enclosed so unless you've got a very particular screwdriver, you're not getting in to replace any innards.

To that end, Nokia has put two hinged gates on the side of the N8, giving access to the microSD card slot and the SIM card port - both are quite hard to pull open (which isn't a bad thing as you're probably not going to be opening them very often) and clicking cards in can be tricky too without long fingernails.

Nokia N8 continues the higher-end feel: the 3.5-inch capacitive OLED screen really pops with colors (although doesn't quite match the impressive sharpness of Samsung's Super AMOLED) and the simple design sees only one rather functional-looking button on the front, eschewing the extra soft keys Nokia has implemented for so many years.

The right-hand side of the phone houses the camera key, which has staggered press levels to allow you to only push it down partway for auto focus. There's also a volume key with raised buttons, although these are fairly far away from each other, so can be hard to hit when you're not looking and trying to work out which one you're pressing.

There's also the slider switch on this side of the Nokia N8 - if you're a fan of physical unlocking, then this is a good example of that, although we prefer the on-screen offering, where a short tap unlocks the phone and works far more easily and effectively in our opinion.

The left-hand side of the Nokia N8 is a little sleeker, with only the aforementioned gates for microSD and SIM, as well as the uncovered microUSB slot, which may perturb some who are used to their Nokia phones having a gate on top to prevent dust creeping in. But has anyone really ever had a dust-destroyed port in the past?
The top of the N8 is where it mostly happens though - there's a mini HD port, the 3.5mm headphone jack and the power switch, which is also used to quickly change profiles when buzzing through the N8's interface.

The bottom houses the charger port - and it's a standard 2mm 'new Nokia charger' port, which initially seems like an odd choice when you can also charge through the microUSB port too, like all other phones, even when connected to a PC.
We can only assume that Nokia has done this so that when you're streaming over USB on the go (more on that later) you can keep charging the phone too. Nokia has thrown a large range of toys in the box with the N8 - an adaptor to convert HDMI to mini HDMI, decent ear buds with an inline remote, a slim line Nokia pin charger and a USB lead with adaptor too to attach hard drives on while on the move
The device is packaged in an eco-friendly slim box, with a premium look and worth the money you will spend on it.
at 7:36 AM
Email ThisBlogThis!Share to TwitterShare to FacebookShare to Pinterest