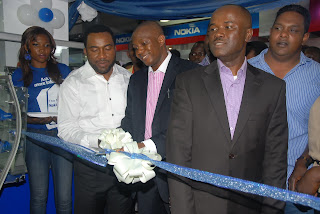 Nokia Nigeria, has upgraded one of its general retail outlets, “SLOT” in the heart of Computer Village, Ikeja, to  deliver unmatched total consumer experience to its teeming consumers.
Known as the shop-in-shop concept, the upgrading involves the exclusive branding of an entire section of a general retail outlet, where only Nokia devices and solutions are on display.
Speaking at the launch of the SLOT outlet, Nokia’s Managing Director for West Africa James Rutherfoord said Nokia consumers now have an opportunity to test and interact with live devices for functionality and features before deciding on what to buy.
According to him, this hands-on experience with a range of phones helps the customer make an informed choice of the device that best suit his/her purpose.
Also speaking, Nokia’s Head of Retail, Ladi Oyatayo, disclosed that the “shop-in-shop” will have Care representatives on standby to provide after-sale service whenever it is needed. He said the initiative was bound to give Nokia faithfuls a total consumer experience. According to the Nokia Retail boss, plans have been perfected to launch about 60 of such outlets in premium locations across the country.
On his part, the Managing Director of SLOT, Nnamdi Ezeigbo, said he was delighted to be part of Nokia’s retail initiative. According to him, Nokia is living up to its reputation of innovation and Customer Service orientation.
Ezeigbo used the occasion to advice consumers to avoid patronizing counterfeit and substandard phones. Apart from being dangerous to health due to excess radiation, while adding that counterfeit devices do not stand the test of time.
“They pack up sooner than later, and the customer has no warranty or after-sales service”, he added.
at 5:45 AM
Email ThisBlogThis!Share to TwitterShare to FacebookShare to Pinterest
Labels: Nokia