Etisalat Gives Out Over 500 Scholarship Grants to University Students 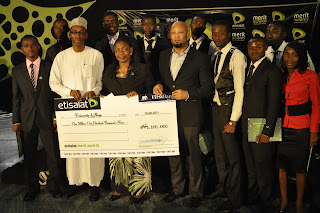 Director, Government and Regulatory Affairs, Etisalat Nigeria, Mr. Ibrahim Dikko (2nd left); Deputy Vice Chancellor (Academics), University of Abuja, Dr. (Mrs.) Florence Nwinyi (3rd left) and Director, Customer Care, Etisalat Nigeria, Mr. Plato Syrimis (4th left) with students of University of Abuja, recipients of the Etisalat Nigeria scholarship at the 2011 Etisalat Merit Awards held at Afficient Event Place, Kano recently.
As part of its corporate social responsibility programme of giving back to society, Etisalat has in less than three years given out over 500 scholarship grants to deserving students from universities across the country.
The grants were given under its Merit Awards Scheme, an initiative built on its core CSR platform of empowering Nigerian youths to obtain qualitative education.
About 90 of these university students recently received their grants of N100,000 each at the Etisalat Merit Awards regional presentation ceremony held at the in . And like the students, their respective schools also received a grant of N100,000 from the telecommunication giant. The schools include: of ; , ; , Sokoto; ; ; , Bauchi; , ; Kebbi State University of Science and Technology, and Federal University of Technology, Yola.
Speaking on the rationale behind the Merit Awards Scheme, Etisalat CEO, Steven Evans described education as a powerful tool for change and economic growth. According to him, dynamic economies that have emerged in the last 30 years have done so on the back of heavy investment in education, saying that this has driven the company’s desire to support the government in encouraging improvement in the educational sector in Nigeria.
Evans who was represented at the event by Etisalat ’s Director of Government and Regulatory Affairs, Ibrahim Dikko, said the scheme was one of four major programmes on Etisalat’s education platform. The others include the Adopt-A-School initiative, Teacher Training Programme and the establishment of the Etisalat CSR Centre. He pointed out that the Merit Awards scheme focuses on tertiary education, rewarding and encouraging excellent academic performance. And the scheme appears to be paying off, from feedback by the partner universities and recipient awardees.
Ferdinand Enyereibe Nwaoha, a third-year student of the department of Electrical/Electronics Engineering of the , and two time recipient of the award has already moved from being a second class upper student to being a first class student. His words: “The award has impacted on me positively, and in many ways. For instance, with the money from the scholarship, I was able to buy a brand new laptop and an internet modem, which has helped to broaden my means of studying. Now I can study with ease, as a lot of the challenges I had before have been eliminated. I can also study and do my assignments online, while also keeping abreast of latest developments in my field of study.”
“I have also been forced to study harder, knowing that if I maintain my academic excellence, Etisalat will reward me again, and that is what has happened. Last year, I came in as a second class upper student with a CGPA of 4.34, but this year, I came in as a first class student with a CGPA of 4.55, and that was from the encouragement I got from the award,” he said.
It was a similar story for Sherafdeen Muhammad, a third-year student of the department of Electrical Electronics of the , and two time awardee. He thanked Etisalat for the award, saying that the award has impacted positively on his life, especially in his studies. According to him, the award has helped him in the purchase of text books, which he ordinarily wouldn’t have been able to afford due to their prices.
Speaking also at the event, the Deputy Vice-Chancellor (Academics), , , Muhammad Bello, commended Etisalat for what it has done in the educational sector in less than three years, not only through the scholarship scheme, but also through its Adopt-A-School initiative and other programmes. He urged other corporate organizations to emulate Etisalat, arguing that if all corporate bodies can do half of what the company has done, the nation will be the better for it.
at 7:53 AM
Email ThisBlogThis!Share to TwitterShare to FacebookShare to Pinterest
Labels: Etisalat