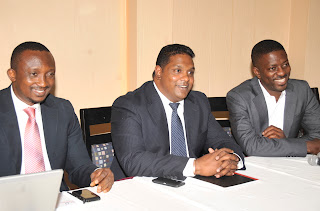 L-R: Service Network Manager  Nokia West Africa David Efanga, Head of Care Nokia  West Africa, Silvin Sinan, Head of Communications Nokia West Africa, Osagie Ogunbor at the Anti-counterfeit Media roundtable in Lagos.
Public awareness campaign on the dangers of counterfeit phones seems to be yielding a positive result. Nokia has stated that the market share of fake Nokia devices has significantly dropped.
The head, Nokia Care for West Africa Silvin Sinan made this known during a media parley to highlight the dangers of counterfeit devices.  Sinan highlighted activities that Nokia has engage in recent times to include “Be original Buy Original” campaign and the SMS-warranty check.
He explained that the SMS warranty scheme enables buyers to do a check to verify whether the phone they are buying is genuine or not. The “Be Original Buy Original Campaign” has been launched with above-the-line advertising as well as awareness campaign in trade.
Sinan explicated that the lure of buying fake phones at cheap prices is no longer attractive as Nokia now has a range of devices that are available at the same affordable prizes but still far more durable with value added services. The Nokia care boss also named the advantage of the using genuine device to include access to proprietary services on Ovi store, Nokia Life Tools (NTL) internet data package by operators and the 12 month warranty.
He thanked the media for the support in drumming up the anti-counterfeit message and promised that Nokia was eager to support government with initiative that will totally eradicate fake or counterfeit phone.
at 4:20 AM
Email ThisBlogThis!Share to TwitterShare to FacebookShare to Pinterest
Labels: Nokia