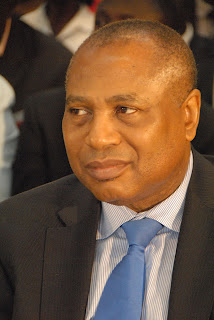 Executive Vice Chairman of the Nigerian Communications Commission (NCC), Eugene Juwah has stated that in the next ten years there would be adequate broadband facilities available in the Nigerian industry.
He disclosed this at the 8th anniversary of Telecom Consumers Parliament (TCP) and 10 years of telecom revolution in Nigeria held in Lagos recently.

This he said would result in more investments, more revenue to government, social security, more employment, and improvement in socio-economic infrastructure.

He noted that his team is committed to the growth and total transformation of the industry.
According to him, the telecom revolution has generated 18 billion dollars (1.8 trillion) Foreign Direct Investment in Nigeria, and has brought an increase in revenue generation to the federation’s account as well as mass direct employment of Nigerians by the service providers.

In its intervention on regulation, Juwah noted that the Commission has been issuing Regulatory Directions to the industry to ensure that stakeholders keep to the rule, while adding that consumer interest is considered as key to the performance of the industry.

The main challenge according to Juwah is the quality of service which had not reached the envisaged level of efficiency.

The NCC EVC said that erratic power supply, vandalism of telecom infrastructure and lack of basic infrastructure, high level of insecurity, multiple taxation and militancy as other challenges facing the industry which has affected the overall performance of the industry.

The former Chief Executive of the commission, Ernest Ndukwe said that over 70 countries in the world have passed the 100 per cent teledensity level, and thus noted that Nigeria still needs to grow its teledensity from the current level of about 66 per cent to 100 per cent to achieve the vision 2020

Ndukwe noted that the USPF would have critical role to play in extending services to rural communities, while adding that Nigeria must reach all parts of the country with both voice and data carrying infrastructure.

at 6:01 AM
Email ThisBlogThis!Share to TwitterShare to FacebookShare to Pinterest