Samsung aims for top spot in mobile market in 2012 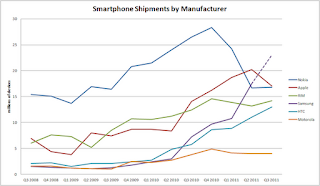 Samsung Electronics has stated that it would become the world's largest mobile phone maker in 2012, ending Nokia's 14-year reign.

Choi added that Samsung was likely to meet its 2015 sales target ahead of schedule and plans to increase investment in 2012.

According to Reuter’s reports, Samsung overtook Nokia in revenue terms and was confident of topping the Finnish group in shipments in 2012.

Some analysts said that Samsung maybe too optimistic. In terms of sales, Nokia was expected to sell 418 ­million phones in 2011, versus Samsung's 320 million, while the gap should narrow this year to 388 million versus 359 million, according to Reuter’s poll.

Samsung noted that in early December its 2011 handset sales reached 300 million handsets for the first time, mainly led by strong demand for its Galaxy smartphones.

at 1:49 AM
Email ThisBlogThis!Share to TwitterShare to FacebookShare to Pinterest