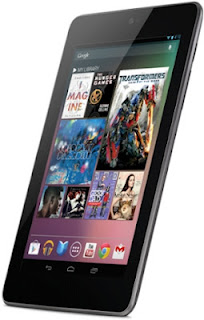 Google has unveiled its Android OS as well as its first tablet.

The Nexus 7 tablet features a 7-inch IPS touchscreen with 1280x800 HD display, running a Nvidia Tegra 3 processor and 1GB RAM. The 340g device offers 8 or 16GB of storage, front camera, NFC, the Chrome for Android browser and a range of pre-loaded content, plus a USD 25 credit to buy content on Google Play.

It is available for preorder from Google Play in the US, UK, Canada and Australia, and starts at USD 199 ( N32,407.15 ) in the US. It will start shipping mid-July to other regions.

According to Google, the new Android 4.1 OS Jelly Bean will start rolling out to earlier Nexus devices also from mid-July for N37, 292.65 for those in Nigeria. Google promises a "smoother, faster and more fluid" experience, with features such as calling or email directly from notifications, better text prediction when typing and offline voice typing.

Google also improved on the search with a new user interface and faster voice search, and Google can now speak back, giving a precise answer or a list of search results. The Google Now feature also serves up information as needed, such as the weather at the start of the day, traffic when you leave for work or scores from favourite sports teams.

Google also introduced the Nexus Q, a small sphere that plugs into the speakers and TV for streaming music and video in the home from an Android device. It would be available first in the US. The Google Play store will also offer more entertainment in future, with the addition of magazine subscriptions, film purchases and TV series.

At its develops conference I/O, Google also gave a preview of its Project Glass, which offers a pair of glasses with sensors to deliver information about the surroundings directly to the user's eyes. A limited number of the glasses will ship to developers next year.

For its social network Google+, the company unveiled a dedicated tablet app, first for Android and coming soon for iPhone, and the feature Google+ Events, for organising and recording events. Google said it now has over 250 million users of Google+, while the Android installed base has surpassed 400 million, with 1 million new devices added each day.

at 4:04 AM
Email ThisBlogThis!Share to TwitterShare to FacebookShare to Pinterest