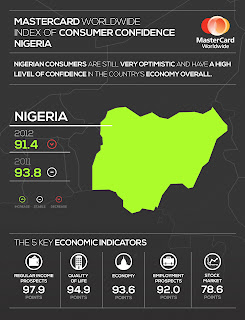 While the Index has recorded a marginal 2.4 point decline from a score of 93.8 a year ago, and a five point decline compared to six months ago, the latest result of 91.4 out of a possible 100 shows that Nigeria’s citizens display continued strong optimism and an extremely high level of confidence in the country’s economy overall.

Now in its fourth year in Nigeria, the MasterCard Worldwide Index of Consumer Confidence is one of Africa’s most comprehensive consumer confidence surveys, and is conducted twice yearly. Interestingly, the latest finding of 91.4 points reflects the precise average of the survey results since its commencement in 2009.


The Index is based on a survey which measures consumer confidence on prevailing expectations in the market for the next six months based on five economic indicators: Economy, Employment, Stock Market, Regular Income and Quality of Life. The Index score is calculated with zero as the most pessimistic, 100 as most optimistic and 50 as neutral.

The most recent survey was conducted between 24 April 2012 and 10 June 2012, and involved 11,376 respondents aged 18 to 64 across 25 markets spanning the Asia Pacific, Middle East and Africa regions. On the African continent, the survey was conducted in Egypt, Kenya, Morocco, Nigeria and South Africa. [1] The Index and its accompanying reports do not represent MasterCard financial performance.

“MasterCard Worldwide carries out this Index in order to provide informed understanding in the shifts of Nigerian consumer sentiment, as well as to assist in the identification of market trends over time,” says Omokehinde Ojomuyide, Country Manager, West Africa, MasterCard Worldwide.

“Nigerians remain one of the most optimistic groups of consumers among those surveyed by MasterCard on the continent, with an Index score of 91.4 points in this latest set of results – over 12 points higher than the average of the five African countries surveyed,” says Ojomuyide.

“The high level of confidence in Nigeria’s economy held by its citizens is also supported by the International Monetary Fund (IMF) that believes booming oil prices and an ambitious reform agenda have helped Nigeria ride the worst of the global economic downturn. The IMF has forecasted Nigeria’s Gross Domestic Product (GDP) to grow by 6.9% during 2012,” she continued.

However, all four of these indicators remained remarkably positive with each scoring over the 90-point mark. Regular Income, at 97.9 points, was the most optimistic of the five indicators for Nigerians, followed by Quality of Life with a score of 94.9.

The Stock Market indicator however showed a significant decline in confidence of nearly 17 points and was the indicator with the lowest score of 78.6.

Ojomuyide added, “The highest level which the Nigerian consumer confidence reached was in the second half of 2011 at 96.4 points –which was one of the highest recorded levels of consumer confidence in the 25 markets surveyed at the time. Even though the most recent results are lower than this, they remain significantly higher than their lowest level of 83.2 points in the first half of 2010.”

The only African country revealed to be more optimistic than Nigeria in the Index is Morocco, which yielded a score of 94.1. Egypt, Kenya and South Africa all yielded less optimistic results in the survey.

“It is very encouraging to see that the Nigerian consumer confidence levels remain strong and higher than the average results of the other African countries surveyed,” concluded Ojomuyide.

Methodology
Respondents were asked five questions pertaining to their 6-month outlook on the economy, employment prospects, the local stock market, their regular income prospects and their quality of life. The results of their responses were converted in 5 component indexes, which were averaged to form the MasterCard Worldwide Index™ of Consumer Confidence (MWICC) score. The MWICC Index score and the 5 components index scores range from 0 – 100 where 0 represents maximum pessimism, 100 represents maximum optimism and 50 represents neutrality.

The Index is calculated based with zero as the most pessimistic, 100 as most optimistic and 50 as neutral.  Five economic factors are measured: Employment, the Economy, Regular Income, Stock Market and Quality of Life. The responses are consumers' thoughts on the six months ahead. Data collection was via Internet surveys and face-to-face interviews, with the questionnaire translated to the local language wherever appropriate and necessary.

at 1:56 AM
Email ThisBlogThis!Share to TwitterShare to FacebookShare to Pinterest