The Continent is Ready For An African Pope ...Says CNN 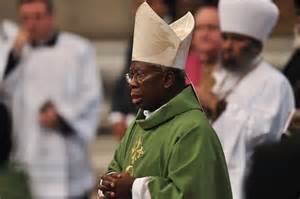 In a current survey carried out by CNN in collaboration with a mobile phone crowd-sourcing company, Jana, it was observed that more than 80 percent of Africans believe the continent is ready for an African pope.

The survey showed that only 61% think the world is ready, according to an exclusive survey of 20,000 people in 11 countries while 86% thought an African pope would increase support for Catholicism in Africa.
Almost two-thirds of those surveyed thought that the Vatican was ready for an African pontiff, while more than 50% believed the church would become more conservative under an African pope.

Furthermore, respondents aged between 13 and 19 were slightly less likely to feel that their continent was ready for an African head of the church, with 22% saying it was not ready, while only 14.6% of those polled over 40 felt the same way.

The resulting comments revealed a wide range of views on the church’s role in the continent, on faith, homosexuality and racism.

at 9:22 AM
Email ThisBlogThis!Share to TwitterShare to FacebookShare to Pinterest