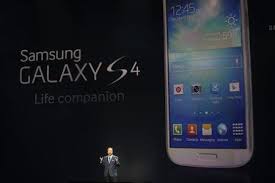 Samsung is reportedly prepping three new variations of its flagship Galaxy S4 smartphone and they will begin launching in early June, according to a new report. SamMobile has a good track record with details surrounding unannounced Samsung devices, and the blog reports that Samsung’s first Galaxy S4 variation will be the Galaxy S4 Zoom, which is set to debut in Europe during the first week of June. The Galaxy S4 Zoom reportedly features a 16-megapixel camera, a 4.3-inch qHD display and Android Jelly Bean.

SamMobile also notes that the Samsung Galaxy Mega 6.3 could begin rolling out in Europe as soon as this week and the Galaxy Mega 5.8 may launch next week.
at 5:26 AM
Email ThisBlogThis!Share to TwitterShare to FacebookShare to Pinterest