Ever wonder how much time all of us spend staring at/using our smartphones on a typical day? New data from Experian Marketing Services’ Simmons ConnectSM mobile and digital panel has the answer.


At a high level, the headline is the one above. The average adult is spending almost one hour every day getting personal with his or her personal device. To be honest, based on watching most people’s behavior, this number seems low. That said, the findings are worth a look. 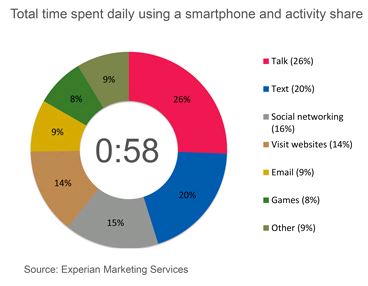 While it is difficult to challenge the facts, again, just based on observation of friends, family and colleagues, the numbers do not correlate but maybe I just need to associate with different people. For example, given other research that shows the blurring of personal versus work time and the number of individuals who are checking e-mail and Facebook as soon as they wake up and immediately before they turn in, it is surprising those numbers are not higher. Indeed, while a generation breakdown is not provided, one would suspect the charts of older versus younger users would be remarkable different.

Where things do get a bit more interesting -- although still hard to explain without some demographic and psychographic data -- is what Experian sees in the differences between Android users and iPhone fanatics. 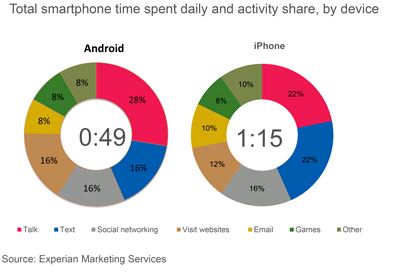 Experian does provide an interesting explanation as to why video doe not even register in the above chart. It says about the charts above: “to sum to a single daily total it was necessary to calculate individual activity contribution using a base of all smartphone owners, including those who don’t spend any time engaging in a given activity during a typical day.”
Since a picture is worth a thousand words, there is one final chart that Experian shared that really captures what is happening. 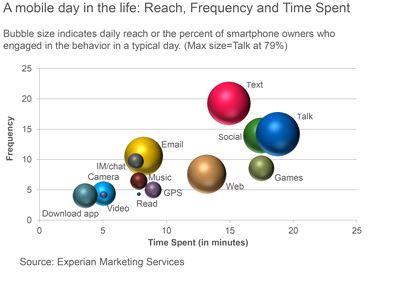 Video does show up here, but Experian notes that since 98 percent of smartphone users don’t watch videos on their phone during a typical day, it is understandable why the bubble is so small.

The reason I keep coming back to video is based on a running debate in our office about form factors for smartphones and whether they make a difference, particularly in regards to which size phone you purchase and which ecosystem, Android or iOS, is the one of your heart’s desire.

What these numbers seem to reveal is that smartphones, though great devices for talking, texting, checking e-mail and social networking, are not what you want to use to look at video. Part of this might be a function of drain on batteries and data plans, but much of this is because when we want to watch video, the bigger the screen the better.

These trends bode well for smartphone and tablet manufacturers. The results indicate that increasingly, our mobile devices are the platforms of choice for interactions and that consumer clearly have preferences for various functions. While the corresponding insights are not available for tablets, it is hard not to imagine that video would be anything other than a big bubble and that the amount of time spent would be higher.

In short, the big trend of all of us in the developed world accumulating more and more personal devices based on our ability to discern optimal functionality based on our context and volition is going to continue to drive explosive sales. I can’t wait for research on the tablet side of things.
at 8:21 AM
Email ThisBlogThis!Share to TwitterShare to FacebookShare to Pinterest