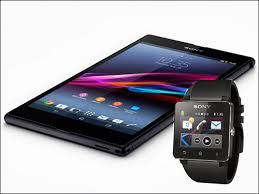 Sony Mobile has unveiled a large-display phone in its Xperia range a new SmartWatch and at the Mobile Asia Expo in Shanghai.


The SmartWatch will launch in September, and the Xperia Ultra Z will be available some time in Q3.
The SmartWatch 2 functions as an extension of an Android smartphone, allowing users to manage calls and messages, take photos and manage presentations and apps remotely without taking their phone out. Sony claims to be the leader in smart watch technology, after introducing its first such device with Bluetooth in 2007.

The new SmartWatch comes with NFC connectivity for pairing with the phone. Sony also offers over 200 apps to customise the device's interaction with the phone. When not connected it works as a standard digital watch, with 0dust- and water-resistant screen and a changeable wristband.

The new Xperia Ultra Z is an Android smartphone with a 6.4-inch high-resolution display. Weighing 212g with a 6.5mm body of tempered glass, the water-resistant phone will be available in a choice of black, white or purple. It features Qualcomm's Snapdragon 800 2.2GHz processor, LTE, NFC and HD Voice, as well as a range of Sony entertainment and business applications.

at 9:05 AM
Email ThisBlogThis!Share to TwitterShare to FacebookShare to Pinterest