Android 4.3: When is it coming to my phone and tablet in Nigeria? 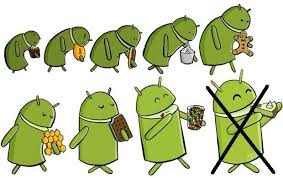 Android 4.3 has been announced, the big question is, when is it coming to your phone or tablet? The Android 4.3 release date will be varied, as it has been with previous versions, as manufacturers analyze and then implement the new features on their phones.

Various devices run on Android OS but when will it be available for users of this devices? Here we'll piece together all the latest news about when your phone should be getting the new version of Android and all the new features it brings.


For Nexus devices, Google has confirmed at the company's Android 4.3 / Nexus 7 2nd-generation launches that Android 4.3 will be rolling out from 24 July for its Nexus range of devices. That includes the older Nexus 7, the Nexus 10, the Nexus 4 and the Galaxy Nexus.

Regards to HTC, Google didn't say when the HTC One Google Edition device would be updated. HTC hasn't said as yet if the HTC One or the newly announced HTC One mini will be getting the update, but it has told Pocket-lint that it is "reviewing Android 4.3 to see how this update fits into our plans", and that it hopes "to have more info for us soon".

As for Samsung devices, Google also didn't detail whether the Samsung Galaxy S4 Google Edition would be getting the update. As for its plans for Android 4.3 for its Galaxy range of devices and its Note series? Samsung told us: "Samsung UK will confirm upgrade plans to Android 4.3 to selected Galaxy devices in the coming months."

The Sony devices has been very good in the past about updating to the latest version of Android, and this time around it looks like Sony is working on getting Android 4.3 to its devices, however needs to still work through Android 4.2 first:
"We’re already getting stuck in and can confirm we’ll make 4.3 available for: Xperia Z, Xperia ZL, Xperia ZR, Xperia Tablet Z, Xperia SP and Xperia Z Ultra…"
The firm also says they are looking at "uplifting some of our other devices running 4.1 direct to 4.3 – we’ll share more info / deets / timings when we can"

Motorola has not said anything yet regards to this new development but they noted that the new Moto X, being announced on 1 August will come with Android 4.3

at 5:18 AM
Email ThisBlogThis!Share to TwitterShare to FacebookShare to Pinterest