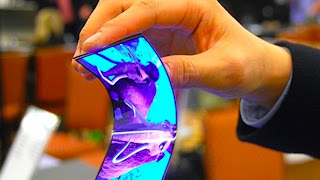 Samsung is about to release a mystery device which has appeared in benchmarking tests with the model number SM-G910. The device name bears a striking resemblance to the Galaxy Note 3’s model number SM-N900.

The benchmarking tests list the phone’s specifications as a Snapdragon 800 processor and an Adreno 330 graphics chip – similar to the Galaxy Note 3.

Previous reports had suggested that there would be a flexible version of the Galaxy Note 3 arriving with a 5.5-inch display before the end of October.

The curvy Youm display has been floated for the last couple of years. The last time it was shown was at CES 2013 in Las Vegas.

At the time, observers commented that Samsung was likely to include the technology in either its Samsung Galaxy S or Note ranges.

at 2:28 AM
Email ThisBlogThis!Share to TwitterShare to FacebookShare to Pinterest