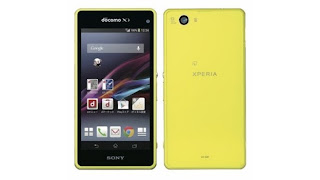 As was hinted at in the leaked brochure yesterday, the phone departs from the Mini strategies of rivals HTC and Samsung.


The Xperia Z1F comes with a spec sheet very similar to the full size Z1, with a quad-core 2.2GHz Snapdragon 800 processor, 2GB of RAM, 16GB of storage, NFC, Qi-wireless charging and a 2300mAh battery.

The only major difference is the – obviously – smaller 4.3-inch 720p display.
Sony announced that it will be available in four colours, namely lime, black, white and pink. It will come with Android 4.2 with Sony’s own customisations. No price tag at the moment.

at 8:49 AM
Email ThisBlogThis!Share to TwitterShare to FacebookShare to Pinterest