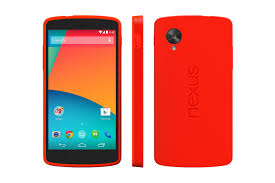 A red version of the Google Nexus 5 had been rumored for a number of weeks. Yesterday, Google put the red edition of its latest Nexus smartphone on sale via the Google Play Store.

It joins the original black and white versions of the Android smartphone. The red version of the smartphone is priced at the same amount as the original editions that were launched in October 2013. The approximated price for the 16GB version is N75, 300.00 while the 32GB model is priced at N85, 340.00.

Other than the new red casing, the red Nexus 5 is the same phone as the model launched in October. It comes with a five-inch 1080p display and a quad-core 2.26GHz Qualcomm 800 Snapdragon processor. It also comes with the latest version of Android 4.4 KitKat. The Nexus 5 is made by LG on behalf of Google.

at 5:19 AM
Email ThisBlogThis!Share to TwitterShare to FacebookShare to Pinterest