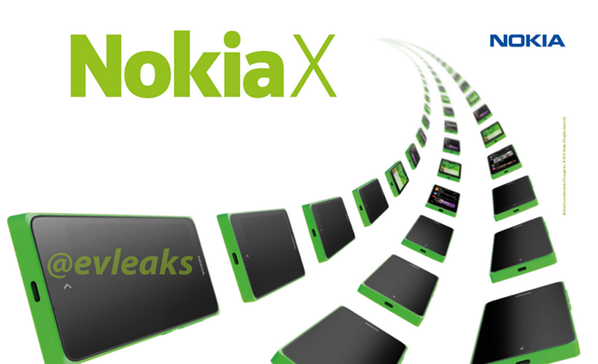 The Nokia X launch date is expected to be unveiled on soonest when the firm holds is Mobile World Congress keynote.


The advert was tweeted by @evleaks recently. It shows the Nokia X name that has emerged as the likely moniker of Nokia’s Android phone line. It shows a line of green Lumia-style smartphones heading towards the viewer.

The tweet doesn’t reveal anything further about the phone. @evleaks has established a reputation for being right almost all of the time.

Details of Nokia’s first Android smartphone have slowly leaked onto the internet over the last couple of month. However, the last couple of weeks have seen a raft of speculation and leaks.
They include what the smartphone will look like, most of its specifications and even the version of Android it runs on.

According to those reports, the phone will reportedly run on a dual-core 1GHz Snapdragon processor and 512MB RAM and come with a 4-inch screen and 4GB of storage. It is also said to feature a microSD card slot and five megapixel camera.

A Vietnamese website suggested that the phone may sell for as little as £66 ( Approximately N18,000.00) when it launches. The Android smartphone is expected to debut at Mobile World Congress next week.

at 6:22 AM
Email ThisBlogThis!Share to TwitterShare to FacebookShare to Pinterest