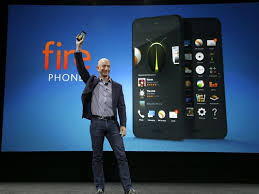 The Chief Executive Officer, Amazon, Jeff Bezos, has unveiled its smartphone, named Fire. This was made known at a recent event in Seattle, USA.


The smart device would enable Amazon to position its offerings at the core of the smartphone, featuring its online store and digital services for games, mobile applications, movies and music directly on the device. Fire will allow consumers to use Amazon's set-top box to pull up information on their phone about what is being viewed. The smartphone will also provide customers access to Amazon's Mayday technology-help service.

The device also comes with the new Dynamic Perspective feature to provide a more 3D perspective of images on the screen. This uses four specialised cameras and four infrared LEDs built into the front face of the phone to track head and eye movements, as well as a dedicated custom processor, real-time computer vision algorithms and a new high-performing graphics rendering engine. Dynamic Perspective can be used to employ one-handed gestures, such as auto-scroll when reading on the screen or tilting the device to enhance map information. It can also enhance apps and games with in-depth images and updating context.

Also new is the Firefly feature, to integrate access to Amazon's catalogue of physical and digital content. This uses image, text and audio recognition technologies to identify web and email addresses, phone numbers, QR and bar codes and over 100 million items, including movies, TV episodes, songs and products. By pointing the camera at something and pressing the Firefly button on the phone, users can identify and locate the items on Amazon. They can also find additional information on the object online, save the information to their phone or share it with others.

The Fire smartphone will ship on 25 July and is available exclusively on AT&T in the US. Beginning 18 June, customers can pre-order the Fire at amazon.com/Fire-Phone, att.com and in AT&T retail locations.

at 3:10 AM
Email ThisBlogThis!Share to TwitterShare to FacebookShare to Pinterest