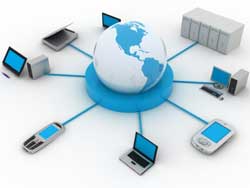 Researchers have discovered a way to radically increase the speed of data traveling over a fiber optic network, and if the technology is adopted, it could mean a much faster Internet. "It should take a couple of years to have an impact, but it's really about the determination of the technological community to implement this," said Nikola Alic, a research scientist at the Qualcomm Institute.

Researchers have found a way to significantly improve the performance of fiber networks, which could lead to benefits for both consumers and Internet service providers.
Information in fiber optic cables degrades with the distance it travels. When you try to increase the speed at which the data is traveling by boosting the power in the network, degradation gets worse.

"It's like quicksand," said Nikola Alic, a research scientist at the Qualcomm Institute, part of the University of California at San Diego. "The more you struggle, the faster you sink."
The researchers found a way to manage the distortion in a network as you add power to it. That allows the data to travel longer distances before being reconditioned by a repeater, or electronic regenerator.

The problem with repeaters is they must be applied to anywhere from 80 to 200 data channels. "That can be expensive as well as highly power consuming," Alic said.

To reduce the number of repeaters required in a network, the researchers use wideband "frequency combs" to ensure that signal distortion -- known as "crosstalk" -- that occurs in the fiber can be predicted so it can be converted into its original state when it arrives at its destination.

"We knew crosstalk was not random, because it was governed by strict physical laws," Alic explained. "However, when we tried to look at it in the lab, it appeared as random. This was a mystery."

What the researchers eventually discovered was that the frequency variations in a communication channel had to be fine-tuned at their source. Doing so allowed them to compensate for the crosstalk in the line in advance of its arrival at its destination.
"If you correlate the variations, or wanders in frequency, then the crosstalk becomes manageable," Alic said.

That produced some impressive results in the researchers' lab. For example, they were able to decipher information after traveling 12,000 kilometers, or more than 7,400 miles, through fiber optic cables with standard amplifiers and no repeaters.

As with any new technology, there will be stumbling blocks to its immediate adoption.
"It's not exactly compliant with existing systems," Alic said. "All channels in a system have to be correlated, which is a significant change in the existing systems."

The inverse methodologies used to unscramble crosstalk also would have to be added to a system, he added. Still, relatively rapid adoption of the technology is possible.

"It should take a couple of years to have an impact, but it's really about the determination of the technological community to implement this," Alic said.

"I'm afraid that the network operators might be initially opposed to this because they want to take advantage of the technology they already have," he mused, "but that technology can only get them so far."

The technology is especially attractive to new fiber players like Google, noted Alic. "They're very aggressive in their throughput targets, so they fully recognize the importance of this."

Although the researchers' technology will be a boon for long-haul fiber outfits, it won't have much impact in the "last mile" market.

"It affects the range over which you can send information over fiber, but that's not the limiting factor in building the infrastructure for the last mile," said Doug Brake, a telecom policy analyst with The Information Technology & Innovation Foundation.
"The expense is building the network in a city. "Distance isn't a limitation in the city."

Similar research has been conducted for increasing the distance data can be pushed without degradation through copper wire, which is still used in many areas of the United States to get broadband to households, Brake noted.
"It's the same limitation with copper, but you get crosstalk much earlier than you do with fiber," he explained.

"Increasing the distance data could move in copper wire would make a big impact on the competitive landscape," Brake said. "The old telco networks could then up their speeds to be more competitive with fiber."
at 7:43 AM
Email ThisBlogThis!Share to TwitterShare to FacebookShare to Pinterest