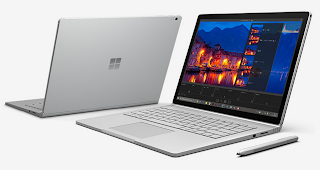 Microsoft has launched a laptop dubbed the Surface Book, as part of a suite of new Windows 10 products.


It also showed off two new smartphones, an updated Surface tablet and a new fitness band.
Much is riding on the launches as chief executive Satya Nadella sets out to prove Microsoft can compete with its rivals.

Analysts said the new laptop may help revive the ailing PC MARKET.
The laptop, Microsoft's first, was the highlight of a tranche of new products shown off at an event in New York.

It is designed to take on Apple's Macbook, with Microsoft directly comparing the products.
It said that, just as its Surface tablet was a hybrid between a tablet and a laptop, so the Surface Book would "reinvent categories".

Analysts seemed impressed."It is a highly innovative, flagship device that will act as a much-needed halo product for Windows 10 and the broader PC MARKET and proves that innovation in personal computing is not just confined to Apple's Cupertino campus," said Ben Wood, head of research at CCS Insight.

at 10:00 AM
Email ThisBlogThis!Share to TwitterShare to FacebookShare to Pinterest