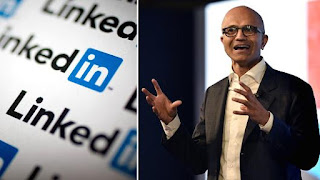 
This has moved LinkedIn shares to 48 percent, while Microsoft's stock was down 4 percent. Trading in Microsoft had been halted briefly for news pending before the announcement of the all-cash deal.

Jeff Weiner will stay on as CEO of LinkedIn and will report to Microsoft CEO Satya Nadella. The deal was unanimously approved by both companies' boards, and is expected to close by the end of the year. The acquisition is still subject to approval by LinkedIn shareholders and regulators.

"The LinkedIn team has grown a fantastic business centered on connecting the world's professionals," Nadella said in a statement. "Together we can accelerate the growth of LinkedIn, as well as Microsoft Office 365 and Dynamics as we seek to empower every person and organization on the planet."

In a statement to LinkedIn employees, Weiner said "little is expected to change" and employees will have the same titles and managers.

"The one exception: For those members of the team whose jobs are entirely focused on maintaining LinkedIn's status as a publicly traded company, we'll be helping you find your next play," Weiner said. "In terms of everything else, it should be business as usual. We have the same mission and vision; we have the same culture and values; and I'm still the CEO of LinkedIn."
at 6:53 AM
Email ThisBlogThis!Share to TwitterShare to FacebookShare to Pinterest